When asked what he would say to those thinking about sending a team to a crisis response site, “Go already!” was Andrew’s response. Andrew, his wife and son, and two other members of Faith Bible Church just returned from a short-term ministry 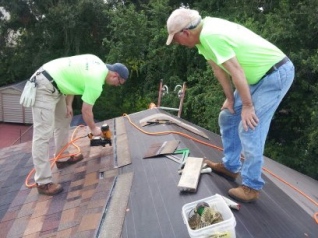 time in New Orleans. After hearing about the Crisis Response ministry and the continuing needs in New Orleans, the team of five prepared to go and then drove 16 hours from Illinois to Louisiana.

Their time with the homeowners whose homes they worked on was a highlight. They divided into two teams and helped with roofing, mudding and sanding homes where the homeowners have been trying to get back into the homes that they’ve been paying mortgages on since Hurricane Katrina devastated their area. Another highlight was the block party at the end of the week with the homeowners that they had gotten to know. These block parties are a relational tool to get to know the neighbors of where the teams have worked. They began such a memorable relationship with a church planter whose home the worked on, they will probably have him come to their church to continue building their partnership in the gospel. 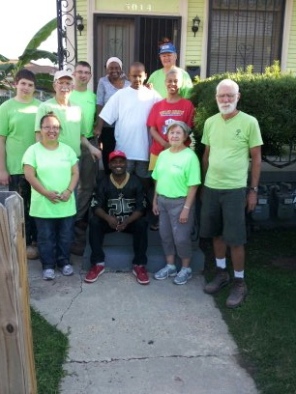 Andrew wants to take back what he learned during his short-term team time in New Orleans. He plans to get other church members involved in prayer walking around their church at home. He would like to incorporate a fall festival and family nights to make their church more visible in the Joliet community. He said the God taught him to be a mouse vs. an elephant, “Listening to those in the area (about their needs) and not to go in stomping like an elephant.”

Like Andrew, you can find the details to send your own short-term team on our web site! He felt like ReachGlobal Crisis Response had made it easy to go on a short-term team. His team was able to fill out the paperwork and then the New Orleans team did the rest – figured out which homeowners they would be helping, had all of the supplies and tools as well as their meals and housing figured out and were helpful in making their first short-term trip a memorable and profitable one.